You have to understand that when someone says Grand Central Terminal, not everyone thinks of a train station. That’s how it was for me when I read about it online. Weeks before my trip to the US, I scoured the internet for things to do in New York City. We had three and a half days and a lifetime’s worth of experiences to expect.

And so it was on a travel website that I came across this must-see place. Upon reading a review, it dawned on me that terminal referred to the train station, but I still was nowhere close to prepared as I entered the station.

My friend and I walked a long path, scanning the map to identify the exact entry point. And when we, at last, figured it out, we rode down the escalator to the actual lobby of the station.

In hindsight, that moment of my life was like a movie. My jaw dropped on its own accord, and my eyes grew wider than in a long time. For someone who’s accustomed to dingy stations overflowing with weary travellers who clutch five or six carry-on bags, wailing children, the stench of uncleaned coaches, the whiff of engine smoke, and months worth of grease on every wall and railing, the central terminal was a make of pure gold.

It’s funny, but the station walls were mustard, glowing in gold because of the thousands of lights that lined every inch. People flocked, of course. But nothing else seemed even to remind me of the train stations back home. Arches to my left and right led to tracks on both sides. A stairwell on either side made up a path that went around the centre of the terminal. And right in the middle, facing me was a grand gold board displaying departure and arrival times.

Blinking in slow motion, I tilted my head upwards gawking. There, stretched out across the entire ceiling was a mural—a gorgeous work of art—illustrating the night sky, the stars, the moons and, the zodiac signs. Orion seemed to wave at me, and the majestic Scorpio slithered in a corner. I spotted Cancer and Leo and the good old Libra weighing, analysing every situation.

My mind felt amused. My heart elevated. And my body transfixed. It was grander even than the setup palaces in movies. And trust me, Tamil (my mother tongue) movies have a lot of castles.

I couldn’t imagine the genius that went into building such intricate works of beauty into a train station. Its purpose was the same as any other train station in the world: helping people find their trains. But this station went way beyond: there was a massive food court in the lower levels featuring the best of culinary experiences like fresh gourmet bakeries, Shake Shack, and the Oyster Bar. And as if that weren’t enough, there were over 40 retail shops within the station, including the likes of Starbucks, Apple, and various other chain stores.

Inside the Grand Central Terminal 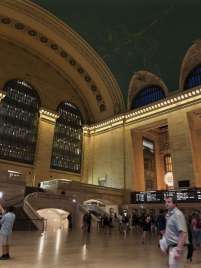 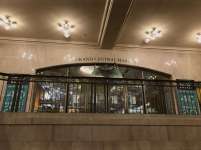 It’s no wonder that Wikipedia claims that in 2013, over 21 million tourists visited the station—not to board trains but to experience architectural marvel and elegant interior designing. And of course, the Grand Central Terminal is a US National Historic Landmark.

While I was busy wrapping my head around the many glittering things about the station, most people around didn’t care as much. New Yorkers. They were more worried about missing their trains or losing their seats. Alas, I realised, perhaps the Grand Central isn’t as exciting when you’ve been there a hundred times.

Tourists, on the other hand, seemed satisfied with posing for a few photographs against the glowing granite walls, or with the shiny display board in the backdrop. It’s a memory worth keeping and cherishing. Would they spend another evening of their vacation at the same place, I wondered doubtful.

In my case though, there’s every chance I missed many little noteworthy things at the station. And I’m sure that if I go back, it’ll still seem different, new, and impressive as the first time.

Perhaps that’s the difference between a tourist and me—it’s not about where I went or stood, but about the significance of the place and the spine-tingling sensation afterwards. It’s not about selfies or Instagram Stories, but rather more about the muse it leaves me with and the undeniable yearning for more.