While in Pleasanton, I asked my colleagues about places I could look around, walk by, and just spend a quiet day. In a unanimous voice, most of them responded with: Lake Merritt. I looked in to it. It was a huge lake in Oakland, California, and—according to my maps—lots of space to walk around.

That was more than enough to hook me in. Although, I realised as I prodded my map further, I would have to take a 20-25 minute train ride to get there. Lucky for me there’s a train station right by the lake, making it easier to get to and from the lake. Everyone I spoke to agreed the lake would be worthwhile indeed.

It happened to be the day after I visited the Golden Gate Park. I had walked about 23 kilometres at the park and woke up the next morning with my legs stretched out in an awkward angle. My thighs were sore, my feet were tired, and yet I was excited beyond words to see the lake. I left my hotel at about 7:30 and reached Oakland’s Lake Merritt station at about 9:15. It was a bright summer day and the sun showed signs of warming up later. I walked on to the street.

The first thing I noticed was the silence. Then I realised why: lack of people. I was at the Oakland Museum of California and I saw no one in sight. It exuded the feeling of a narrow dark alleyway without the stink or the unfriendliness of it. My first impression of Oakland was that it was a weird combination of a welcoming and, yet, human-deprived place. I loved it.

Following the map on my phone, I stopped when I saw the lake stretching out in front of me. I had arrived at a main street juncture. With long and tall buildings flanking either side of me, lots of greenery extended in front of me. Beyond it I could spot a streak of blue that’s Lake Merritt.

Vehicles whizzed past, people going to do whatever they had to do on a Sunday morn. Even then, there were fewer vehicles than in San Francisco. Oakland yet again presented a smaller, quieter, city. The massive open space in front of me housed railings and benches, glittering in the morning sun bearing early walkers and joggers. I crossed the road and approached the railings. It was 9:30 and all around me people stretched themselves, talked to each other or into their earphones. Some walked with children, some walked with parents, and even a few dogs walked their humans.

Finding no sign or guide lines about walking the lake, I took to my right and started off staring at the lake and at the buildings that loomed over it. Although Oakland didn’t compare to the glamour and rush of San Francisco, it’s in no way secondary to the high-rise buildings it prides upon. Towering structures made me pick up my jaw many times over. And I stopped walking every few minutes to try and encapsulate entire buildings into the screen of my minuscule iPhone 6.

Lake Merritt is huge, and beautiful. It was still early in the day when I started walking around the lake and the moon from the previous night lingered until about 10:00 am. For some weird reason I felt so at peace seeing the moon hovering on the left side over my head while the sun shone on my right. It was as if I stood in between the best of two worlds. The lake, I later learnt, is in fact a lagoon, and was formed in 1870 and is home to the oldest wildlife refuge in the United States. 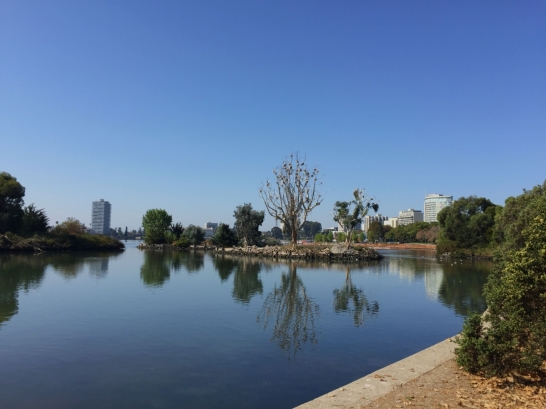 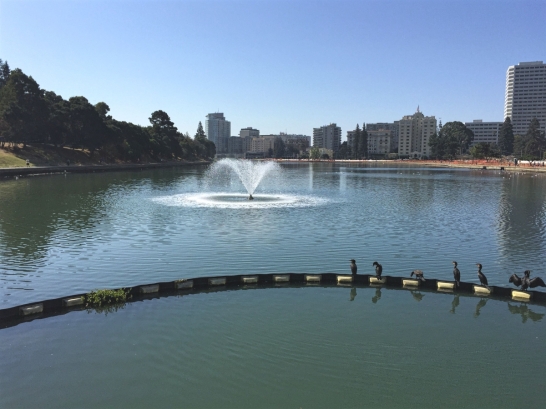 As I walked around the 155-acre lake, I experienced mainstream life of Oakland. Everywhere I went in the US with fellow travellers, we were tourists. But on that day, not only was I alone, but I also had a backpack like any college student. I strolled for a while, stepped up my pace in some places, and stood gazing at the water in most instances. And as I walked, I encountered people going on with their lives unperturbed by this scrawny person unfamiliar with their town. A couple discussed alternative running locations for the following week while two older women fed pigeons in silence. Parents dragged kids in trams, and a teenager argued with her mother on the phone. Glass buildings floated on the water and elegant trees, twisting from the ground up, posed for cameras without a shame. 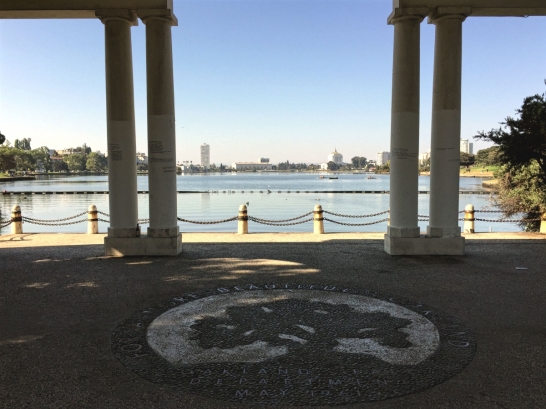 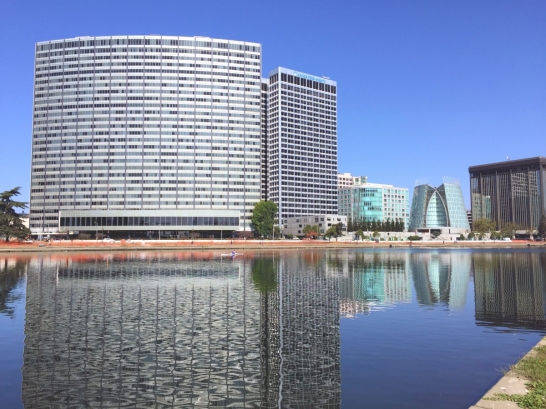 No one noticed a duck doing a backflip. They’d seen in hundreds of times already.

It was all new for me, though. It was a glorious day to spend outside, and joy from inside of me. It wasn’t until I finished a complete round of the lake that I felt the pain in my legs return. But it was nothing—numbing physical pain was no match to the soul-touching experience of inhaling fresh water breeze.

Always on the go,
Chasing horizons,
To be broken, hurt,
Limbs branching outwards,