About a month ago, I boarded an aircraft heading westward. I had to fly to the United States of America to participate in an event for work. It was a three-week official trip, but I had decided to extend it by another week, making it a solo adventure.

When I walked town to the gates at the airport on August 22, I had no idea what to expect except a twenty-hour gruelling plane journey to the other side of the world. Friends had already scared me with stories of boredom, bad food, crankiness, and—worst of all—jet lag. Despite all of this, though, I was excited beyond myself. I’m not the kind of person who’d spend so much money to travel to the US. So though this opportunity came by me unexpected, I was determined to make the most out of it.

The first thing that hit me hard when I landed was how long the journey had been. I had been warned, yes, but even so, the last couple of hours in the aircraft had felt the longest.  In hindsight, however, it was fun. I liked the food, I liked the service, I liked the fact that I had a seat by the window, and could look out at the clouds below us any time I wanted. Overall, it was comfortable flight and there was nothing I could complain about. I’d say Emirates is a good airlines, in case you’re looking for options. Once I had overcome the mental exhaustion of the flight’s duration, I had to face the next big thing: immigration, customs, and baggage claim. It’s the least romantic part of any journey. The questions weren’t bad—but the waiting was horrible. It’s surprising how after waiting inside a plane for 20 hours, how hard it was for me to wait for an hour longer to claim our baggages. Funny, now. Hell, then.

When all was done and cleared, we (a party of five colleagues) headed out of the airport into the chilly breeze of San Francisco. We booked a cab and as we drove through the city towards Dublin, Pleasanton, the reality of the first world hit me hard. Unnoticeable to me were the streets. Six lanes of freeway (or highway as we call it in India) was massive for someone who’s seen only four lanes of it. And it seemed sensible, too, to have six lanes because the number of vehicles and the sizes of private ownership were much larger than any I had seen or imagined.

Unlike in India, though, the traffic moved. Perhaps it was the big streets, but our cab didn’t remain stagnant for more than a couple minutes at a time. We spent about 45 minutes in traffic—traffic that was more pleasant than the ones at home. We landed at 3 pm, but by the time we reached our hotel, it was 6 already. We checked in and checked out our rooms. Mine was bigger than what I needed, but it was quite evident from first glance that I’d have a wonderful stay.

Still trying to get my head around the largeness of everything around me, I cleaned up, because we should meet work friends who had arrived earlier for dinner. When I looked through my window, it was bright outside that I had to double check my phone. It looked like four o’clock in the afternoon, but it was seven already. I had to sit myself down to comprehend the weirdness of nature. The sun still wasn’t sure whether it wanted to set.

And while I stared at its dying embers, I received a message saying restaurants would soon close. But it’s only 8! I yelled inside my head. The sky had become darker while I left the room and joined my colleagues at the reception of the hotel. I wasn’t hungry but we had to get food and then sleep, because we had to head to work early next morning. One of our colleagues who had lived in the US all his life, decided to take us to a burger place—almost every other restaurant would close within the next half hour.

That was another surprise for me. Dublin, Pleasanton is a small town. And most of the population was older. There was no active nightlife, and most of the shops shut down at 9 with a a handful of exceptions closing anytime after 10. That’s not what I expected when I travelled to the US. For me, America had resembled fanciness, priciness, and unnecessary vanity. I had expected to walk into a boisterous disco-like restaurant when in fact I walked into an almost empty restaurant. 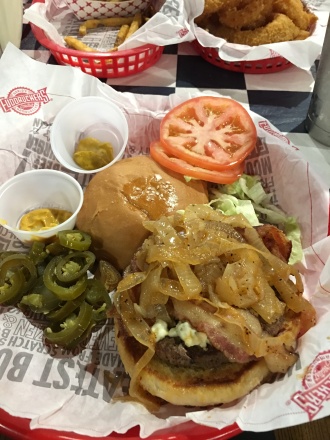 We ordered burgers—at least that wasn’t unsurprising—and grabbed ourselves some water and mustard. When my bacon and blue cheese burger arrived at my table, I had to take a deep breath before I could even digest its size. It was double the size of whatever I could eat. And that was the smallest burger in their menu.

I managed to eat it without hating myself. It did taste pretty good, after all. But even then, portion sizes in America seemed ridiculous to me. Not only did Americans eat so much food, but they also topped it off with sugar soda or sugar milkshakes.

By the end, I’d had an eventful first day in the US, and was ready to sleep.